Turns out I do gaming research!

Spatial cognition and foraging in the rainbow lorikeet 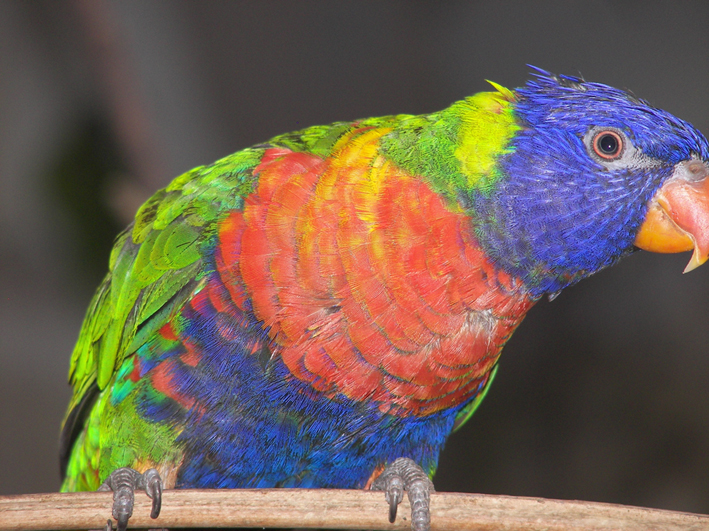 Thanks to the gang at Hunter Valley Zoo I had an opportunity to work with some captive-reared rainbow lorikeets (Trichoglossus haematodus). These are beautiful native Australian parrots that are specialised to feed on nectar and pollen. These birds are representatives of a clade of specialised nectarivores in which spatial cognition has not been previously studied.  Given the long history of win-shift learning and nectarivorous species, my access to these parrots represented a good opportunity to examine how this behaviour might manifest in a captive reared population of  facultative nectarivores.

Win-shift behaviour (the tendency to avoid locations where food rewards have recently been found) is exhibited by a variety of nectarivorous species.  Since the nectar in a flower is consumed in a single visit, avoiding previously visited flowers in subsequent foraging bouts can increase foraging efficiency.  Eventually, however, flowers will replenish their nectar and previously rewarded sites may again become profitable places to visits.  This situation sets up a scenario where a nectarivorous forager can benefit by exhibiting win-shift behaviour at a short-delay (when a flower would still be empty) and win-stay behaviour at a long delay (after sufficient time for a flower to replenish).  This is the pattern of behaviour that a species of Australian honeyeater has been shown to exhibit and so I decided to look for this same pattern of behaviour in the population of captive-reared rainbow lorikeets I borrowed from Hunter Valley Zoo.

The video above shows a single trial in this win-shift/win-stay experiment.  The birds were really quite relaxed about moving themselves around the array and never really did anything in a hurry! In the trial the bird searched all the feeders initially and found the three rewards and then, five minutes later, returned to make just the three visits he was allowed in the second phase.  In this particular trial the bird found two of the three available rewards by visiting two of the three feeders that had been unbaited the first time around.

Overall in this study the birds showed neither a win-shift nor a win-stay bias at either the short or long delay. The absence of such biases have not been previously reported in a nectarivorous sample.  Unlike the birds used in other studies, these guys were captive reared, so no life experience of wild foraging, and they are facultative nectarivores, rather than obligates.  I'll need further studies with wild-reared birds and maybe using a wider variety of training and testing techniques before I can offer an explanation for the lack of a bias in this sample.